Clonamery or Cloone consists of the townlands of Ballybub, Bishopsland, Clonamery itself, Coolnamuck and Oldcourt and lies within the Roman Catholic parish of Inistioge.  Clonamery is an enclosed graveyard surrounded by a substantial wall. The ruined pre Norman church was in use until about 1691;  the earliest part of the church dates from the 10th century and has a Maltese cross carved over the lintel of the doorway.   According to Carrigan (The History and Antiquities of the Diocese of Ossory. 1905) it is dedicated to St Broondhawn, but other sources say this site is traditionally associated with St Brendan.   Just outside the west boundary wall on a high point are the remaining foundations of two beehive and circular shaped stone houses.  The now ruined Cloone Castle belonged to the Fitzgerald family, known as the Barons of Brownford until forfeited under Cromwell in 1653. The family reclaimed the Castle and lands of Cloone, Ballygub and Coolnamuck and held them until 1691 when Edward Fitzgerald fell at the Battle of Aughrim; the property was again subject to forfeiture. 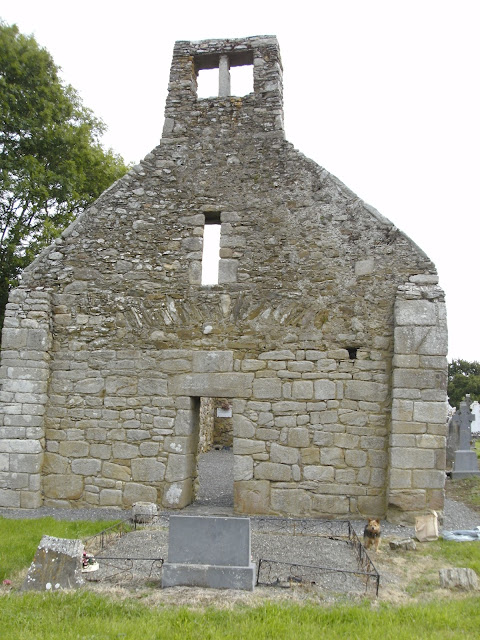 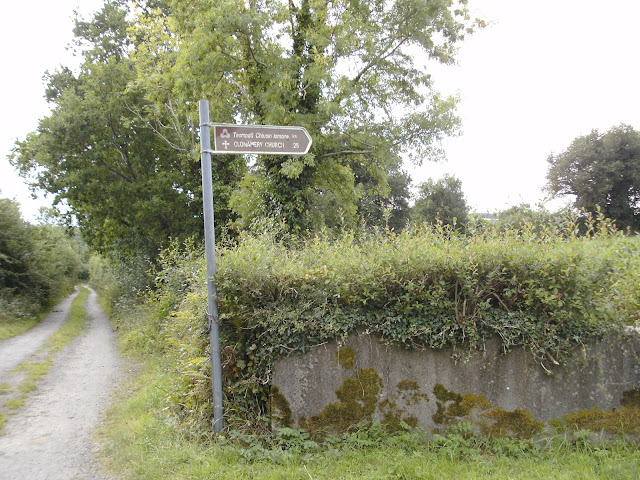 Access to the graveyard is signposted from the main Inistioge to New Ross road.  The way down the boreen becomes very narrow and unpromising so perseverance is necessary.  Another, almost missable sign points apparently in the direction of very large and very empty field; again perseverance is necessary;  a long uphill walk across the field gradually reveals the graveyard and ruined church coming into view...... 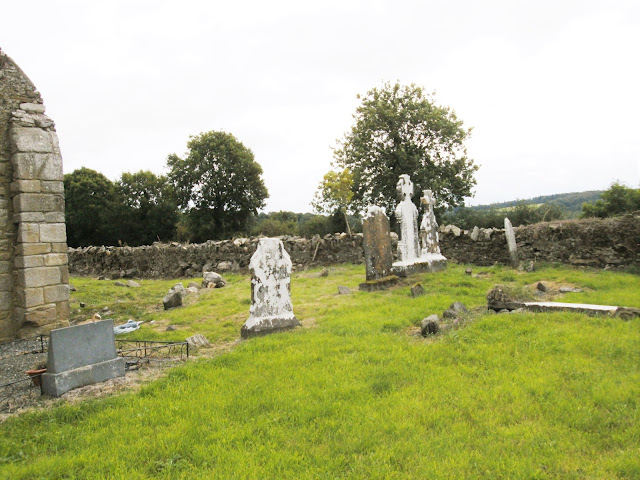 
The identifiable masons who carved the stones are:-
Colles of Kilkenny, Mullen of Kilkenny, Power of Ross (New Ross, Wexford)),  and Walsh of Carlow.  It is interesting to note that people are going outside the county to get their headstones carved; this may reflect the position of the graveyard en route as it were to New Ross but it may also reflect where people were going to get their shopping or an area they they had a reason to visit.  Carlow is quite a distance from here and seems a very long journey to make just to order a headstone.


One unsigned stone has been identified by Carrigan as the work of Darby O'Brien of Rathpatrick from the south of county Kilkenny, near Waterford.  This headstone he describes as carved from granite, with a bordure all around and a large plain cross on the front.   Carrigan describes it as badly carved and was unable to read the full inscription when he visited this graveyard over a hundred years ago. This headstone is now very corroded and still difficult to read but is inscribed "Here lieth ye body of Sylvester Whe........"   Nothing more is legible.   Another source read the stone as "Here lieth ye body of Silvester (sic) Wh(it)e"   (Old Kilkenny Review 1956/57. Clonamery Church by J. J. Hughes).    He says the name is White but that two of the letters which were in high relief had been sealed off.   There are certainly other headstones for the family of White in this graveyard but unhelpfully this particular old headstone has almost certainly been moved to its current position within the shelter of one of the church walls.  I am sure this has been done for the protection of the stone but the original position of any headstone is important since people were often buried next to other family members.  One of the other White headstones dates back to 1829; this is for White of Cappa, parish of Inistioge.  There might well be a connection but since the older stone has been moved it is now impossible to tell unless documentary evidence of a connection comes to light.  Sylvester, though, is a very unusual name and offers hope of identification.  Darby O'Brien had a distinctive if vernacular style and worked as a stone carver in the first quarter  of the 18th century.  It is very interesting that he was operating at Clonamery: not an easy journey from Rathpatrick and a long way for a carved stone to be hauled by a donkey and cart or indeed a long journey for Darby O'Brien to make, even if the stone to be carved was available locally. Judging by other headstones carved by Darby O'Brien, Sylvester Whe....  is unlikely to be a very prominent citizen but probably someone of fairly humble origins.
﻿﻿

In a modest and unassuming grave in Clara graveyard lie the remains of one of Ireland's little known leaders who influenced the direction and development of the nascent Irish state.  Colonel Dan Bryan was born on the 9th May 1900 at Dunbell, near Bennettsbridge in county Kilkenny and attended at one time the local National School at Dunbell.   The modest grave perhaps reflects his own quiet and unassuming character but belies the pivotal, if covert, position he occupied especially during World War II when he played a significant but largely unnoticed role, mainly because of the nature of his work.   His family had farmed at Dunbell for generations and his father John Bryan (1873-1940) held two farms and about 500 acres.  John Bryan, a man of sound judgement,  had political interests and was a  Councillor on Kilkenny County Council.  He and his wife Margaret Lanigan (1878-1954) had fifteen children in all - Dan was the eldest.   As a young man Dan studied initially for Medicine at University College, Dublin but in November 1917 he joined the Irish Volunteers serving in C and G Companies, 4th Battalion, Dublin Brigade.   In June 1922 he joined the National Army and acquired his first commission as Captain in September 1923.  He was to serve most of his career at Army HQ, much of this being in the Intelligence service; his experience in Intelligence work dates from the time of Michael Collins.  In June 1941, during World War II he was appointed as Chief Staff Officer of G2, or in other words Director of Military Intelligence, the Irish equivalent of British MI5.  He is perhaps best known for his very successful operation of G2 and his participation with Dr Richard Hayes, Director of the National Library in Dublin, in breaking German codes and working closely with MI5.   Dr Hayes deciphered codes used by German Agents in Ireland between 1940-1943 and was responsible for breaking the code used by Herman Goertz, the chief spy of the Abwehr in Ireland.
Colonel Dan Bryan died 23rd June 1985.  His papers, which cover his military career and research interests, were deposited by his family at the Archives Department of University College, Dublin; the indexes to these papers can be consulted online but some material still remains closed to public access.  These papers include the Counter Espionage Section and record the activities of G2 with details of mainly German nationals who were under investigation, German Intelligence activities in Ireland and foreign agents active in Ireland.  The papers reflect Colonel Bryan's moral authority and integrity during this difficult time.
Colonel Bryan had an intense interest in Irish military history and was a founder member in 1949 of the prestigious Irish Military History Society, being on its Council from 1950 onwards.  He contributed to its Journal The Irish Sword and was made a Vice President in 1958, a position he held until his death.   His wider military interests included the careers of Irishmen serving abroad in the continental armies of France, Austria and Russia.
He joined the Kilkenny Archaeological Society when it was formed in 1946 and remained a member until his death. He was also a member of the Irish Genealogical Research Society; his research papers at UCD contain notes on the Bryan family and research into the history of county Kilkenny, and Bennettsbridge, in particular.  His papers also include notes on the Walsh Regiment in the French Army and on Count Walsh de Serrant, who was of Kilkenny stock.
Colonel Bryan's role in Irish Military Intelligence was publically acknowledged in a 1983 RTE television four-part series "Caught In a Free State" in which he was portrayed as Colonel Brian Dillon by the actor John Kavanagh.  Hermann Goertz was played by Peter Jankowsky.


The headstones at Clara Graveyard are:-

2.  Sacred to the memory of Eleanor Mary Bryan beloved wife of Colonel Dan Bryan, Ballsbridge, Dublin, died 17th Feb 1978.  The above Dan Bryan died 16th June 1985.  His brother Richard died 25th Dec 1982. RIP.  This is also a decorated Celtic Cross over a headstone and within a kerbed area, lying just in front of the above memorial to his parents.

For further reading see:-
1. http://www.ucd.ie/t4cms/p0071-bryan-dan-descriptive-catlaogue.pdf
This is the collection of the Papers of Colonel Dan Bryan held by University College, Dublin.
2. http://eprints.maynoothuniversity.ie
Biddlecombe, Darragh.  Colonel Dan Bryan and the Evolution of Irish Military Intelligence 1919-
1945.
3. Walsh, Maurice.  G2 - In Defence of Ireland: Irish Military Intelligence 1918-1945. The Collins
Press. 2010.
4. Clara Heritage Society,  A Social History of People and Places in the Parish of Clara. 2006.

Memorial to Colonel Dan Bryan at Clara Graveyard.
Posted by mary casteleyn at 10:20 No comments: