The Cork Examiner for the 16th March 1869 printed the following extraordinary story which should make all genealogists and family historians think twice about what they read on headstones.
Kilkenny: There is in a graveyard attached to Maudlin St Chapel a headstone erected since October 1868 bearing the following inscription.  "Erected in memory of Patrick Power of Maudlin Street who died in 1869 aged 73 years.  May his Soul Rest in Peace Amen".  This stone was erected by the said Patrick Power who is still living in Mauldlin Street and who confidently asserts he is to die in the month of June next or thereabouts.  Meanwhile Pat regularly visits the graveyard, says his prayers at the headstone but beyond this seems very little concerned about the near approach (according to his own account) of his dissolution.
Of course we went straight to  a printed copy of St Rioch's Graveyard Inscriptions which was published by the St. Rioch's Community Group in 2007 (St Rioch's is the graveyard of the Maudlin St Chapel, Kilkenny).   And, as it happens, in Row 11, is a broken stone, No 67, which has been recorded as engraved with the name Power but no inscription was able to be read.     There is no other Power headstone in the graveyard.
A quick search in the Irish Civil Death Indexes reveals no Patrick Power of Kilkenny dying in 1869.  There is however an entry for a Patrick Power, aged 80 years, of Kilkenny who died in 1874, which may be our man.
If anyone of our readers can throw any light on this story or if you can solve this mystery please do contact us.
.
Posted by mary casteleyn at 18:31 No comments:

The ancient and remote graveyard of Ahenny in county Tipperary lies just over the river Lingaun which forms the boundary here between counties Kilkenny and Tipperary; indeed it also forms the boundary between the Irish Provinces of Munster and Leinster. Ahenny is within the Tipperary Barony of Iffa and Offa East in the Diocese of Lismore.  We are looking at both the site of Ahenny in county Tipperary and the nearby site of the old graveyard at Kilkieran in county Kilkenny because they appear to be sister sites and of course existed before county boundaries were ever thought of.  Both have important ancient Celtic High Crosses; it would not surprise us if there was an ancient pilgrim path between the two sites.

Ahenny, nestling under Baunfree Hill is an ancient monastic site which had a church dedicated to St Crispin; the graveyard itself is called Kilclispeen and has a dedication stone on the outer wall dated 1843. 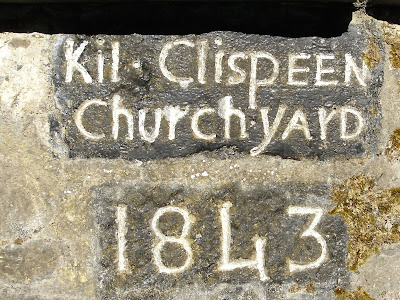 The site has two 8th century Celtic High Crosses and the base of a third.  These crosses are decorated with carved bosses, Celtic interlacing, frets and other abstract designs. The bases have figured panels which are now very worn but include horsemen, Daniel in the Lion's Den and multiple human figures.

The third and missing stone, said to have been the most beautiful of all three High Crosses here, was supposedly stolen circa 1800 and was lost in a ship wreck off Passage East, county Waterford. The entire site is walled and accessed across a field. The route from the Kilkenny side of the border after crossing the Lingaun river takes you though a small lane of cottages, formerly the homes of some of the workers at the nearby Slate Quarry.

With slate in plentiful supply many of the memorials at Ahenny are of slate which does not necessarily stand up well to the weather.  The graveyard is very well maintained and forms a square shape; along the wall to the right of the entrance gate is evidence of pink quartz in a stone along the wall.  At some time in the past damaged slate stones have been removed to the inside of the surrounding walls.  These have been counted by us, with all the other memorials, but only two have any fragments left of former inscriptions. There are interesting Kilkenny people buried here as we shall see further on and plenty of family history to be garnered. Altogether there are 176 visible memorials or grave markers but given the antiquity of the site there must be many more people buried here with no marker at all or whose gravestone has fallen and is now buried beneath the sod.  We have drawn an exact map of the location of all the stones in the graveyard.  All spellings are as they appear on the inscriptions.


Amongst the many beautiful stones two stand out for special mention.  No 114 is an old upright slate headstone decorated on the top with a sunburst design with two pierced hearts at each end of the sunburst, one with the initial J in it and the other heart with the initial D in the centre.  These initials  almost certainly stand for the name of Joseph Dempsy/Dempsey.   A third heart is just below the central IHS symbol which itself  has a cross resting on the central bar of the letter H.  The inscription reads in English " Beneath this sepulchral tomb lie the remains of Mary Dempsy who departed this life January the 4th 1802 aged 17 years.  Dear parents mourn not for me, I am only dead to live eternally, when riseing(sic) from my dusty bed, I hope to reign with Christ our head".  What makes this stone remarkable is that underneath the above inscription are two lines carved in the Ogham script (the ancient Irish method of writing using straight lines and slashes on either side of the lines; most ogham stones in Ireland date to about the 5th century).  It is rare to find this old script on any "modern" stone.  The Ogham was translated into the Irish by an unknown person as  "Fa an lig so na la ata Mari ni Dhimusa o mballi na gCranibh".     This in modern Irish is " Faoin liag seo ina luí tá Máire Ní Dhíomsaigh ó Bhaile na gCranna ".    This in turn translates into English as "Beneath this tombstone lies Mary Demsey of Ballinacronny".   We are grateful to Mícheál Ó Diarmada and Máire Mac Conghail for help with this translation.  Ballynacronny, also spelt Ballynacanny or Ballynacronna in English, is just three miles from Carrick on Suir but in the Kilkenny parish of Owning. Joseph Dempsy is known in Irish as Seosamh Ó Diomusa; he was an Irish language scholar which accounts for the rare use of the Ogham on the above tombstone.   Two of his manuscripts have survived. One is in the National Library of Ireland, Dublin,  catalogued as Irish Literature Manuscript G663.  Here the author is recorded in the Irish as Seosamb Ó Diomusa, operating circa 1800; the manuscript is catalogued as Ossianic and Romantic tales in Irish with religious and other poetry.   His other surviving manuscript is in the Royal Irish Academy, Dublin as part of the McAlister Collection of Irish Manuscripts; it can be found under the catalogue no 1187 as Miscellaneous 18th century Irish Manuscripts; this appears to have a date of 1796. Eamon Ó hOgáin has written of Seosamh Ó Díomasaigh of mBaillin a Chranna in his article on Scríobhaithe Lámhscríbhinni Gaeilge i gCill Chainnigh 1700-1870 (in Kilkenny: History and Society, edited by William Nolan and Kevin Whelan. Geography Publications, Dublin, 1990).  This part of south Kilkenny, around Owning and the Carrick on Suir area of Tipperary was rich in a network of Irish speaking scholars who had managed to keep their language and literature alive.  Well known amongst these is the school teacher Humphrey O'Sullivan of Callan but to add to his name is also that of Patrick O'Neill(1765-1832), a musician, historian and antiquarian of Owning, near Carrick on Suir,  James Scurryof Knockhouse, Barony of Iverk who flourished in the 1820s and of course Peter Walsh of Belline, Irish scholar and agent to Lord Bessborough. (You can read more about Patrick O'Neill and some of these others in The Golden Vale of Ivowen between Slievenamon and Suir by Eoghan Ó Néill, Geography Publications, Dublin).    The Parish registers for Owning and Templeorum start in 1803 but unfortunately there are gaps.  Joseph Dempsy of Ballynacranny and his wife Else Walsh had a girl baptised, Mary, on the 20th March 1804; this is just two years after the death of the Mary Demspsy on the tombstone at Ahenny, so both girls may have been his daughters, the second Mary being named after the Mary who died in 1802.  The sponsors for this second Mary are given as James Casey and Ally Phelan.  Sadly the registers give us nothing else on Joseph but Mary Dempsey of Ballynacronny re-appears on 6th February 1827 when she marries Richard Burke; her sponsors are Walter Walsh and Mary Nash.   There is another Dempsy family at nearby Castletown in the same parish.  Here Peter Demspy and his wife Catherine Kennedy have several children between 1805-1812. One of them is a boy Joseph baptised 3rd August 1806; sponsors for these children, nearly always relations, are recorded with the name Nash so this family is almost certainly related to Joseph Demspy of Ballynacronny.   Other Dempsys include a girl Honor Dempsy of Ballynacronny; she and her husband Patrick Dunne have a girl baptised, Ally, on 9th October 1813.;the sponsors are given as Michael Casey and Catty Walsh.   A Bridget Dempsy died at Ballinacronny aged 70 years on 17th March 1869 (so she was born 1799.) 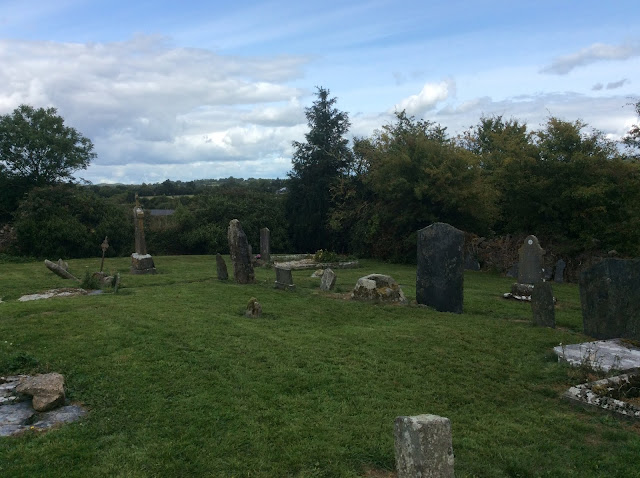 Stone No 131 is a very early stone, lying flat and broken into two pieces: the grass will soon over run it entirely.  At the top of the stone is a carving of the sun, pincers and three nails and a ladder, a sponge, a sword, a little hammer, pick and shovel and a cross with the bones of Adam at the bottom.  This carving is beautiful.  The inscription reads  "The body of James Haw Decsd Septbr ye 26 1735 aged 82 yrs.  Also Joan Haw alis Caughlin his wife Decsd Novbr 1733 aged 70 yrs.  Here lies ye body of (here is inset a small carving of a face/skull) John Haw son to Garret Hawe (sic) and grandson to the  above Jaes decsd Janry ye 6 1755 aged 16.  His brother James Haw decsd Janry ye 12th 1755 aged 9".  The amount of family information on this stone is phenomenal: James Haw was born in 1653 and his wife Joan Caughlin in 1663.  Two children of their son Garret are remembered, John born in 1739 and who died in 1755 and James born in 1746 and who died also in 1755.  In addition there are five other stones to this family of Haw/Hawe including one to the above Garret who appears to have died in 1795.

List of occupations as shown on the memorials
Rev. (Reverend) 112

Index of Masons who have signed memorials
Disney of Clonmel 98, 112*
Gaffney, Waterford 46**
Molloy, Callan 39, 43, 168
O'Keeffe, Waterford 72
Shea, Callan 165
Notes:
* In the Tipperary Directory of 1889 William Disney had a Marble and Stone Works in Upper Gladstone Street, Clonmel.
** This is William Gaffney. In the 1877 Directory of Waterford he is listed as a stone cutter and at Waterside.  He is also referred to as a stone cutter in an article in the 1912 edition of the Journal of the Waterford and South East of Ireland Archaeological Society.


Index of Blacksmiths who have signed memorials
Mackey, Carrick on Suir (metal cross) 146
Note  In the Tipperary Directory for 1889 Thomas F Mackey of Main Street, Carrick on Suir, is shown as running a Grocer and Hardware Store.


Posted by mary casteleyn at 17:18 No comments: