We surveyed this ancient walled graveyard over a period of years between 2015 and 2018.  This is a challenging site to work on but very rewarding.  It is located on the road signposted to Graignamanagh from Thomastown, but is not far out of Thomastown. 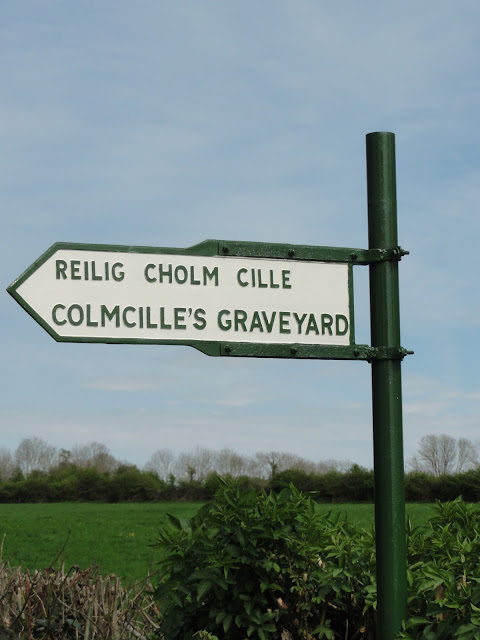 It is accessed across a working farmyard, and then a field where there may be horses loose.  The approach after that is along a grassed boreen, with a small river flowing on the right and leading to a venerable holy well; this is known as St Columkille's Well which lies besides the ruined church. 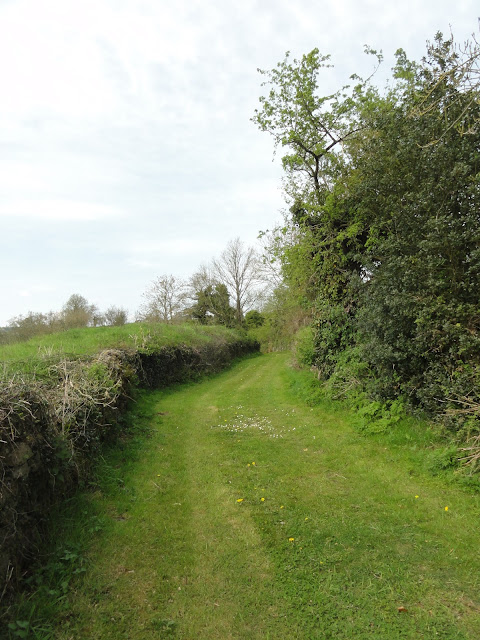 The spelling of Columkille/Columbcille varies greatly.  The local people gathered still here at the beginning of the 20th century to drink the water and to beseech the intervention of the patron saint of the site.   It is almost a vertical site which makes work hazardous on occasions when it can be difficult to get a firm and safe foot hold; Carrigan (History of the Diocese of Ossory.1904) described the site as "rugged". The graveyard is usually very overgrown but had been partly cleared in early summer of 2015 and totally cleared by 2018. 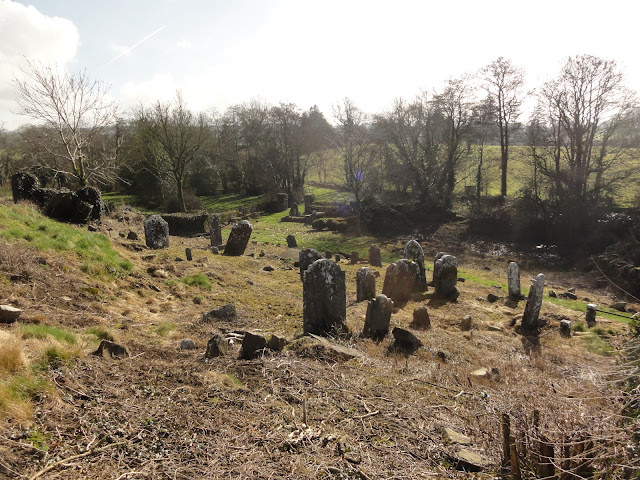 The clearance of the undergrowth exposed a Flood vault not previously recorded amongst other things.


We hoped to find a second War Graves Commission headstone which a local farmer told us stood just beyond the memorial erected by Patrick Ring of Brooklyn (No 4): this part of the graveyard was overgrown,but is now cleared but this second War Grave Commission stone has not been located.. He also reported a stone lying in the river with writing on it; we did not find this stone either.  Two stones recorded in an earlier survey done by Joe Doyle in the 1970s have now totally disappeared, either removed, or broken into bits or totally submerged undergound; they have been included in this current survey for completeness .On the other hand we have found many more stones than listed in the original survey mainly because the site had been cleared of undergrowth and for which we are grateful.
Both Protestants and Catholics are buried here, but predominantly Catholics.  At the entrance to the old graveyard gate (whose original and magnificent piers are lying against the interior wall) and where the remains of the old church are to be found is the following memorial: A prayer for those in purgatory. May the meek and the festive countenance of Christ Jesus appear to thee that he might give thee a place amongst those who are to stand before Him forever.
The parish and the church of Columbkille were appropriated to the Priory of Inistioge by Thomas FitxAnthomy in the early 13th century.  The patron saint of the earliest church that stood here was St Columba, Abbot of Iona. Carrigan reports that in the local Irish language, Columbkille would have been pronounced and sounded like Columba.  Carrigan also reports that this graveyard was known as "Collumbkille (sic), otherwise Kilgriffen in 1631".  He states that St Columbkille's first name in Irish was Crihen or Criffen and by corruption Griffen; hence Kilgriffen and the church of St Columbkille though appearing to be differ are one and the same thing.
The townlands of the parish of Columbkille (in 1905) are:- Ballyroe, Blessington, Carrickmournia, Dangan, Jackstown, Kilcullen, Kiljames Lower, Kiljames Upper, Kilmurry, Knockanroe, Mungmacody and Ruppa; you can expect the people from these townlands to be buried in this graveyard.

There are two ancient stone styles crossing the enclosing stone walls at differing places, indicating pathways or walk ways across the fields used by people for centuries either to reach the graveyard or to attend Mass in the church.
In all 64 stones or memorials of importance have been recorded or listed. As stated there are two stones listed in an earlier recording which we have not located.  This is an ancient burial site and of the memorials recorded by us we have found 6 dating from the period 1773-1795 and another 20 stones from the period 1800-1849. We have counted over 300 visible stone markers which have been placed to record the burial site of a loved one but these markers have no names or dates; in addition there must be thousands of unrecorded burials here with no markers at all.  A local landowner refers to an adjacent field just behind the holy well, as formerly a burial site but there are no memorials there, although the ground in uneven in places and undulates.  We have drawn out a very detailed map of the old graveyard.  And also have amassed genealogical information on some of the families buried here. 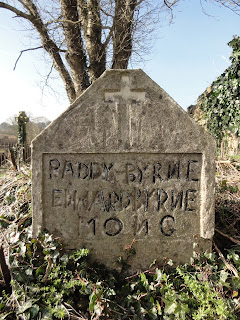 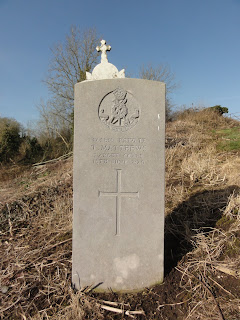