This graveyard was in a very unkempt condition and proved quite a challenge to record with accuracy, which is what we aim to do. 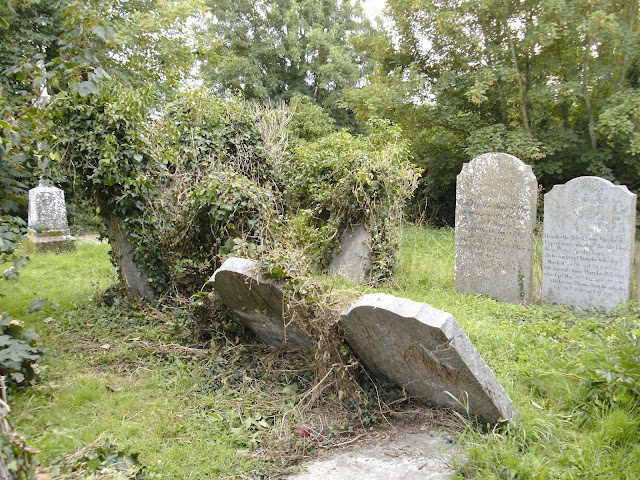 Many tombstones or memorials were completely overgrown by trees, brambles and briars; they were not easy to access and getting access to one stone, (no 106 on our list), in the end proved impossible due to the density of the trees and other bushes around it, although it appeared to be upright and would probably be readable if only one could get at it. 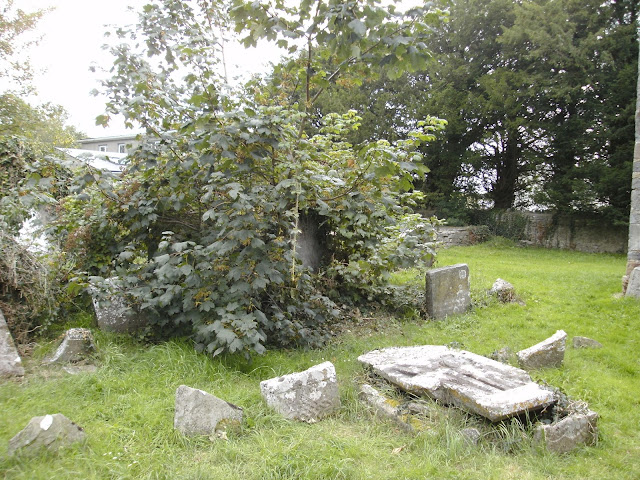 At least 10 headstones had fallen facedown and/or are smashed; there are a further 9 headstones very broken and damaged with only a few tantalising words visible.   There is one collapse altar tomb in need of attention (no 78 on our list). 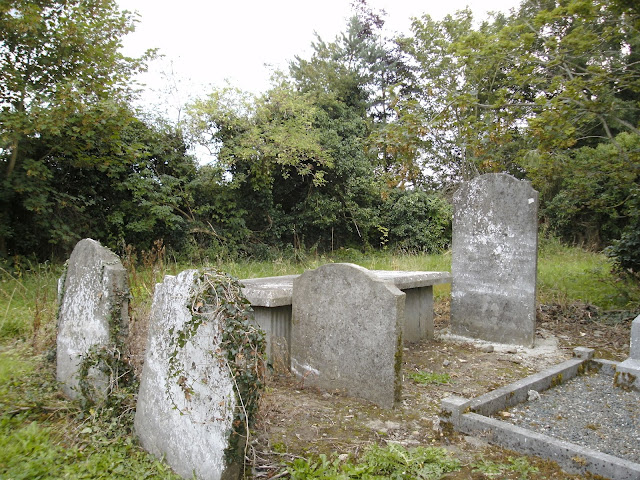 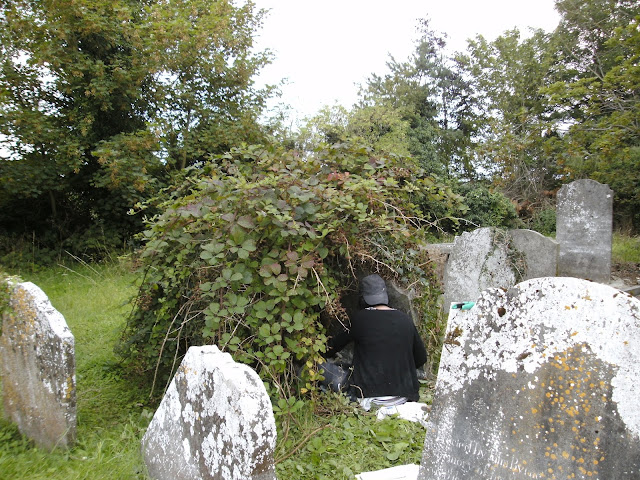 There appear to be at least 6 broken medieval ledger slabs, one of which is being used as a top step down into the lower and modern graveyard.   Carrigan (History and Antiquities of the Diocese of Ossory, 1905) described these as "about half a dozen coffin-shaped uninscribed slabs, all with incised crosses, and some with carvings in relief of human heads".   It is a relief that after more than 110 years we can still agree on the number of ledger slabs! 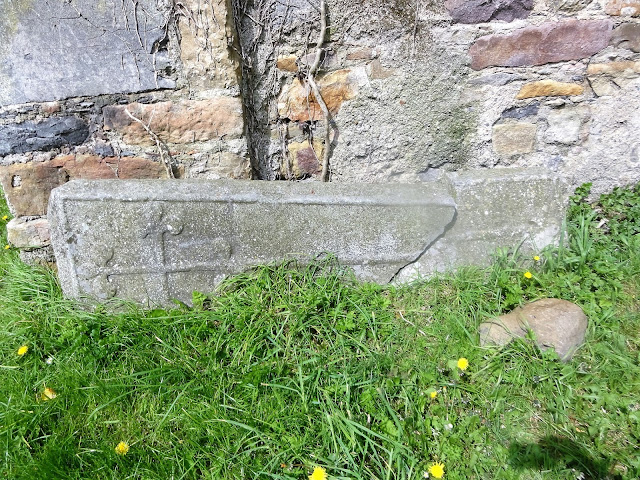 There is one beautiful, but primitively carved headstone, with the crucifixion scene which unusually includes two roman soldiers (no 3 - this is a Sherman stone and dates from 1791).  In the photo below you can make out one of the soldiers standing at the side of Christ crucified - he is brandishing a sword! 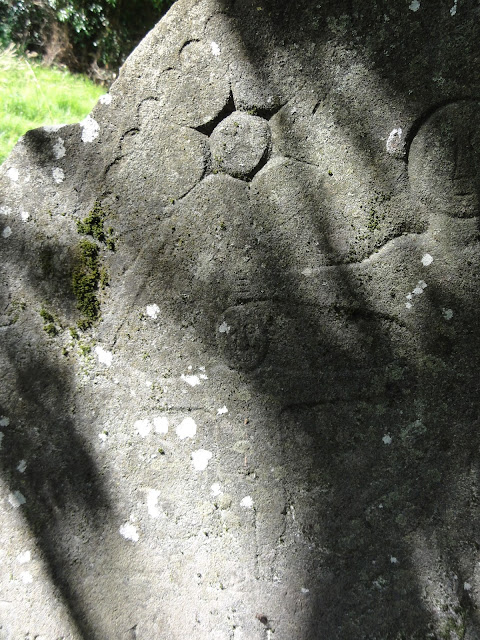 No 15, dating from 1806, has fantastic iconography with very ornate passion symbols including a hammer and pincers; this stone belongs to the Nary family of Bramblestown.  You can just make out the pincers in the photo below. 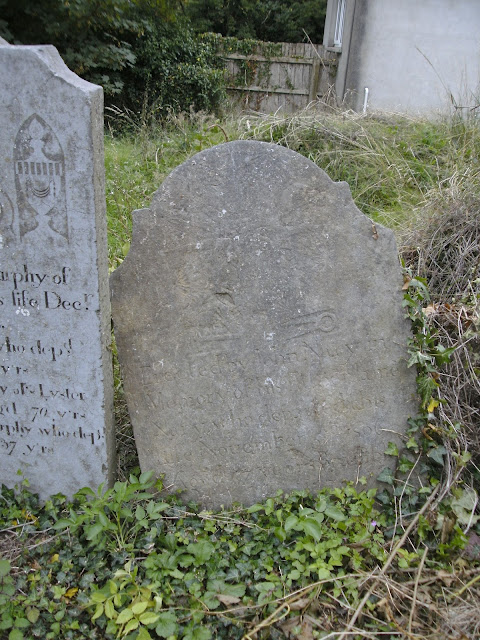 No 49 erected by Mylan of Bramblestown in 1801 has a wonderful carving on it of a devil with three horns and a snake curled up along the bottom of the crucifix also carved on the stone; strangely this stone faces west whilst most stones in the graveyard face east.   Priests are usually buried facing west so that on the day of the Resurrection they can rise and face their deceased congregation who are all buried facing east; however this Mylan stone does not commemorate a priest but has been erected by Edward Mylan for his wife Mary.  It was difficult to photograph due to its position, hidden in trees, but we hope to do a rubbing of this stone.


We surveyed the Old Graveyard in May and August 2014.   We recorded 143 memorials or grave markers.   We surveyed the New Graveyard for completeness in August 2014; at that time we recorded 109 memorials in the newer section, plus 21 stained glass windows in the new Catholic church and sacristy.  It is interesting to view the continuity of local names which appear in both the Old and New graveyard; they are obviously the same families and these old and newer memorials would allow serious genealogy to be done using the information from them.    The New graveyard seems to have come into use around about the late 1930s.  We intend to post this soon.


The ancient Catholic parish church of Dungarvan was dedicated to St David.  It was in a ruinous state and taken down in 1811 to make way for a new Protestant church which itself is now a ruin.  It has proved impossible to gain access to the interior of the ruined church to check for any wall memorials which might still be there. Trees and bushes grow inside it in profusion and at the locked iron gate into the ruined church pigeon/rook droppings are about 6-8 foot high inside what would have once been the entrance lobby.  There is a stone above the door of the church which reads:- "Glory to God in the Highest and on Earth Peace and Goodwill Towards Men".   There is also an inscribed stone on the bell tower which is very high and difficult to read as the stone is corroded but records (we think) the consecration of the church and is signed with the name of The Revd Peter Roe, Vicar.  The Reverend Peter Roe was installed as Vicar of Dungarvan church on 28th December 1808 and resigned from this appointment in 1826.   He was also Vicar of Odagh, and Rector and vicar of Coolerahenn.  He was born in Gorey, Wexford in 1778 and died in 1841  He married in 1806,  Mary daughter of Arthur Gore of Kilkenny and had issue.    I wonder what he would think of his church now if he were able to return to see it............... 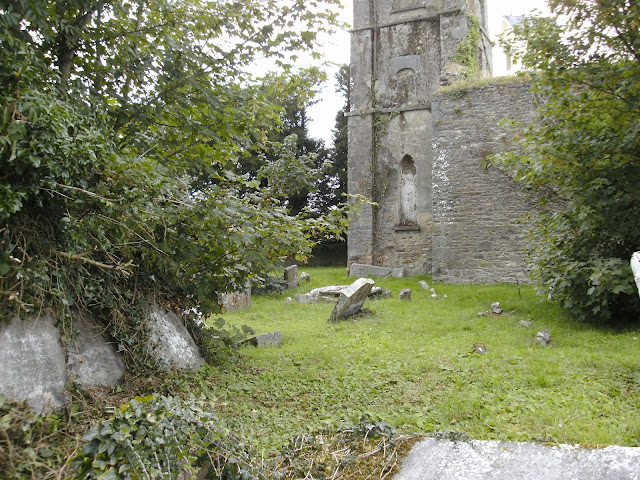 The most interesting, and sadly neglected, memorial is that of Donald mcPierce Archedekin, otherwise McOdo, or Cody of Cloghala.  It is broken and battered and sunk very deeply into the ground. It once stood within the old Catholic church along the south wall and is still in its original position but now exposed to all the elements. 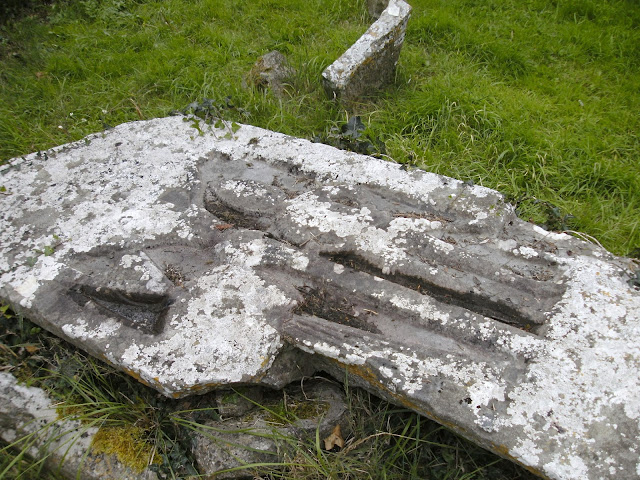 When the new Protestant church was build in 1811, this very old and venerable memorial, lay outside the protection of the new building.  It is showing signs of its age.  It is now so sunken in the soil that it is almost impossible to read the side panels which had symbols of the passion and the inscription "par me Walter Keren, mason 158 (1)".  As you can see from the photo above some sections of the memorial have been broken off.   Below is a picture of part of one of the sunken side panels showing very ornate decoration; this was a very expensive memorial in its time. 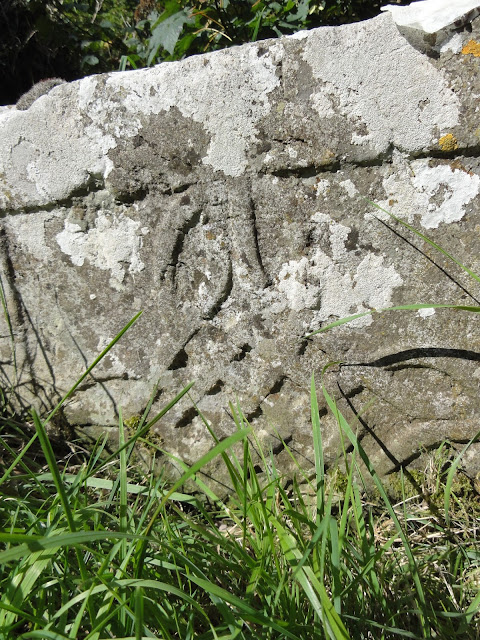 There are Catholic and Protestant memorials in this graveyard.  We have a detailed map for the old graveyard and can check things out for you if you think you have relations buried here.  This graveyard has never been surveyed in detail before. 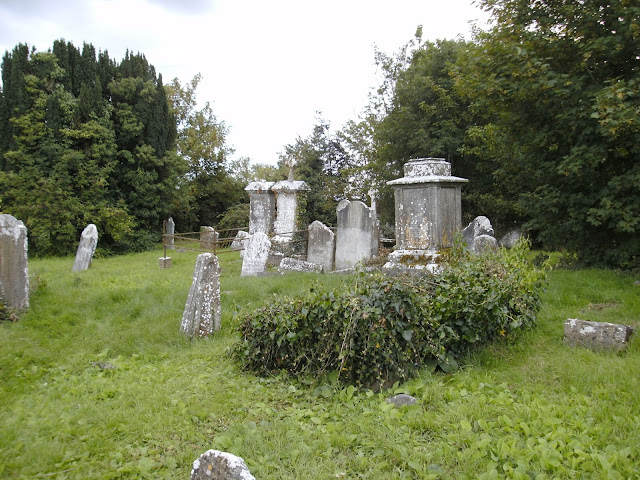 Index of names appearing on memorials in the old graveyard 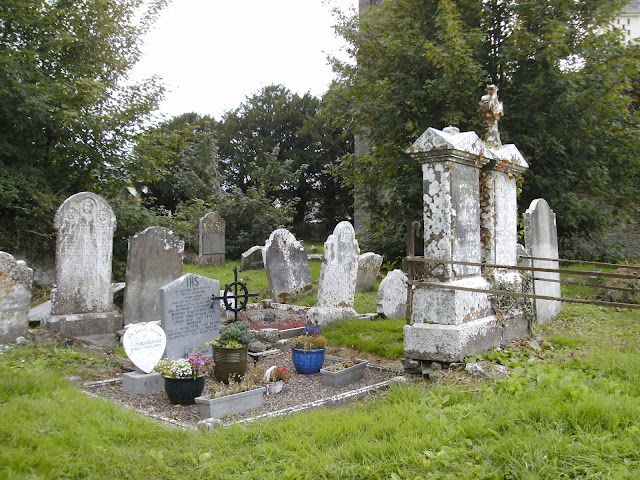 Index of places appearing on the memorials 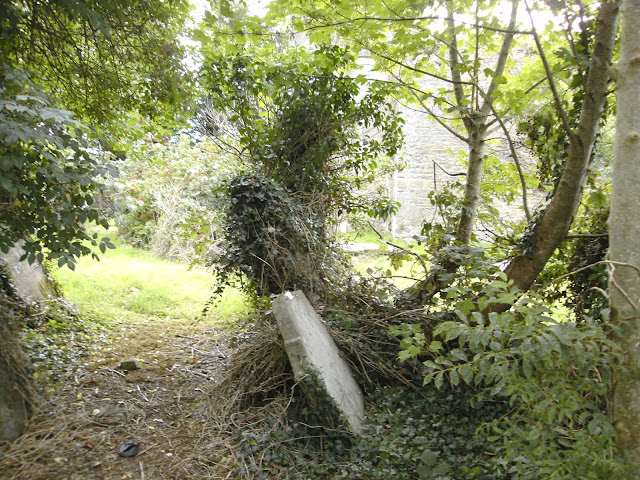 Index of masons who have signed memorials 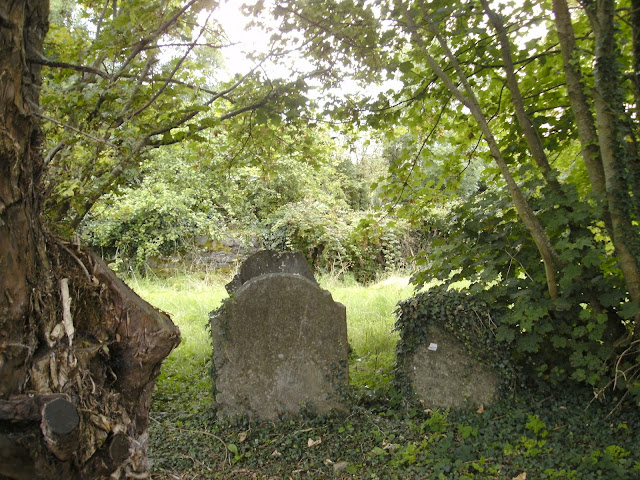